The fact that most of the neolithic sculptures found in Malta are clearly female, led to the assumption that women had a very important role in society.

During the final phase of the Neolithic period, 22 major temples were built on Malta and another 6 temples on Gozo. The temple period lasted from about 3800 BC to 2500 BC, ie about 1,000 years. The temples were built by a people, who presumably reached the islands from Sicily from the archipelago about 8,000 to 6,000 years ago. 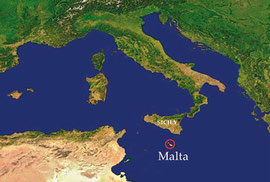 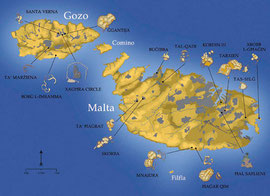 The Sleeping Lady - testimony of the ritual of temple sleep?

The Sleeping Lady belongs as a special feature of the figurative sculptures in Malta. She was found together with the torso of an anthropomorphic sculpture in the Hypogeum of Hal Saflieni and is exhibited in the Archaeological Museum of Valetta in Malta. The small alabaster sculpture is only 12.2 inches long. The figurine is interpreted as a representation of the ritual of temple sleep (Enkoimesis)

The Hypogeum is most likely a burial site, in which also cultic acts were performed. The similarity to the rock-hewn Trilithons with the monuments above ground suggest this. In the Hypogeum were buried priestesses, fortune tellers, etc.

Malta’s subterranean Hal-Saflieni Hypogeum, architecturally intact after five thousand years, is known to have anomalous sound effects. This site’s architectural features not only mirror the above-ground megalithic buildings, but also imply a primitive understanding of acoustic behavior. Could this natural phenomenon lend weight to the theory that the development of monumental architecture may actually have been prompted by a desire to manipulate sound effects for some unknown practical and/or ritual purpose? Can such remote antiquity hold new relevance for science and modern behavior studies?

Pilot findings suggest that the acoustic properties of ancient structures may influence human brain function. In shifting of brain function, it stimulates an area of the brain that bio-behavioral scientists believe relates to mood, empathy and social behavior. A room in the Hal Saflieni Hypogeum known popularly as “the Oracle Chamber” is suspected to have its strongest resonance at precisely 110 Hz. It also looks suspiciously like the prehistoric architects carved in amplifiers.

Sound scientist, Prof. Daniel Talma of the University of Malta explains: “At certain frequencies you have standing waves that emphasize each and other waves that de-emphasize each other. The idea that it was used thousands of years ago to create a certain trance – that’s what fascinates me.”

The early temples have three-, the later ones five lobulated floor plans and they consist of up to 20-ton limestone blocks.

Until now no temples have been found that are less than 4,500 years old. It is suspected that the causes of the sudden disappearance of this culture are the exhaustion of the soil, or droughts.

From the time of the temple there are also relics in caves, rock-cut tombs and hypogaea.

Six architectural miniatures are known, most of them are in the National Museum of Archaeology in Valletta. All miniatures are from the great temples and are to be understood as ritual objects or votive offerings. Although they have realistic features and express formal principles of temple architecture the miniatures are not to be regarded as proper scale models. Similar models are also found in the  large Nuraghe of the Sardinian Nuraghen culture.